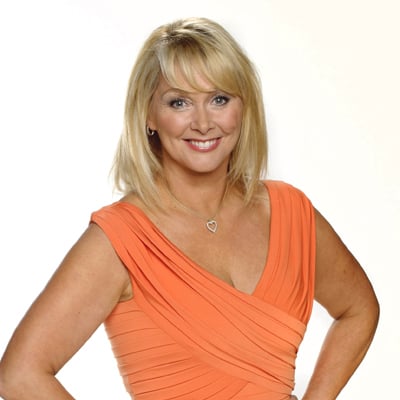 Born as Rita Maria Crudgington in London on 8th March 1954, Cheryl Baker is a popular British singer and television presenter. Post working several secretarial jobs in the shipping industry, Cheryl got her big break with the band Co-Co. She has entered the Eurovision Song Contest twice with Co-Co, winning second prize in 1976 and first prize in 1978.

Soon after Co-Co disbanded, Cheryl got a new opportunity with Bucks Fizz, a pop music group put together by Nichola Martin. Mike Nolan, Jay Aston, and Bobby G with Cheryl, ended up winning Eurovision together with their hit song “Making Your Mind Up”. After this, the group skyrocketed to stardom overnight. Post this victory, Baker became one of the few artists who have won this coveted title twice.

Bucks Fizz toured the world and became a big hit in the 1980s. However, all was not a bed of roses for this amazingly talented singer; as she got in a big crash at Newcastle upon Tyne in 1984. She injured 3 of her vertebrae. Fortunately, she recovered soon. Her co-singer Mike Nolan also suffered a serious head injury that prompted Baker to establish the charity ‘HeadFirst’ that she still runs today to help victims of serious head injuries.

While still staying in the band, Cheryl made her debut in the television industry. Co-hosting alongside Roy Castle, she joined the popular British TV show ‘Record Breakers.’ She was a part of the show for 10 years, co-hosting it with many famous TV personalities. She also co-presented The Saturday Picture Show between 1985 and 1986 with Mark Curry.

Baker also presented Eggs ‘n’ Baker, her own show while her band Bucks Fizz also scored a hit in 1988. During this time, she also released her first two singles, ‘Sensuality’ and ‘If Paradise Is Half As Nice’. In 1997, her life became a subject for the popular biography show, Your Life. She has made numerous appearances on television throughout her career, and has also worked in theatre for productions like Footloose and Honk.

Born and raised in London, Baker has a sister Sheila, and three brothers, Collin, Gary, and Eddie. The Singer and TV Presenter married bass player Steve Stroud in 1992 and gave birth to twin daughters Natalie Maria and Kyla Olivia in 1994. She currently lives with her family in Kent, South East England.

A compassionate human being and a spirited woman, Cheryl has been a doting mother to both her daughters. However, aging and menopause were pretty hard for Baker. In 2006, she opened up about how she dealt with hair loss and weight fluctuation during this time. But, without any doubt, she is a survivor and is known to be brave in the face of adversity.

At the age of 67, Cheryl is still ready to wow the audience with her talent. You can hire her for shows and performances, and make your event a huge success. She also has a lot of experience in the television industry. So, if you are looking for an artist who can knock the socks off of your audience’s feet, then do consider booking Cheryl Baker for Television Shows. Her persona, charm, and wit make her a highly sought-after artist in the UK’s entertainment industry.