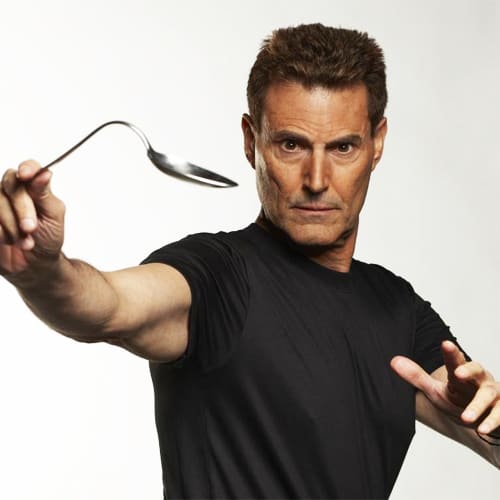 If you are looking for a promising after-dinner speaker in UK, you can hire Uri Geller for event with Celeb Agents today.

One of the most celebrated motivational speakers for events in UK, Uri Geller was born on December 20, 1946, in Israel. His parents belonged to the Austrian and Hungarian descent. Geller first discovered his mind-bending abilities when he was only five years old, but a retired Israeli air force officer witnessed them even a year prior. The army officer revealed this alarming incident several decades later that one day while Uri was playing in a garden near his house, he had a mysterious encounter with a sphere of light.

Later in his life, Uri became well-known in Israel for his amazing psychological powers and public speaking skills. So much so, that even the then Prime Minister of Israel, Golda Meir said “don’t ask me, ask Uri Geller!” in her response to a question about Israel’s future on a national radio program. Some of the world’s leading scientists, including many work partners of Albert Einstein, have considered Uri as an interesting subject for their study. To further stand as a testament to his genuine skills, the most prestigious scientific magazine around the world – ‘Nature’ published a paper on Uri Geller’s work at USA’s Stanford Research Institute.

Thanking him for doing his bit in negotiating the amicable agreement between Israel’s Magen David Adom and Palestine Red Crescent, the Swiss President Micheline Calmy-Rey said “Uri Geller did not just help break the ice with the skills that have made him famous – a considerable number of bent spoons line the road that led to this agreement”. She also told the assembled dignitaries that “he has also played a pivotal role in helping everyone focus on the main objective, and overcoming differences over secondary details at key junctures”.

After six long decades of Israel’s exclusion from the 192-nation conference to approve a new Red Cross (Red Crystal) emblem in Geneva, Uri helped Israel to join the movement by addressing Syria’s humanitarian concerns in his much-praised speech. PwC (PricewaterhouseCoopers) invited him to the 2004 World Economic Forum at Davos, Switzerland as a motivational speaker with globally-acclaimed dignitaries including Bill Clinton, Steve Forbes, and Dick Cheney.

Related to the Father of Psychology

Uri Geller is related to Sigmund Freud from his mother’s side of the family. In fact, his mother initially thought that he has inherited his unusual psychological and mystifying powers from Freud.

One day, while having a meal, he unknowingly curled up a spoon in his hand without applying any physical pressure. The event shocked the entire family, but they decided to keep it candid until Uri started demonstrating his superpowers to others at his school.

From age eleven to seventeen, Uri Geller lived in Cyprus and joined the Israeli army as a paratrooper after returning to Israel. He even fought and got wounded in a famous Six-Day War of 1967. Then from 1968 to 1969, he pursued a career in modeling. He was photographed for numerous diverse ad campaigns.

In 1969, he started to entertain small audiences by exhibiting his powers of psychokinesis and telepathy. And while getting closer to the end of 1971, he managed to make countless stage appearances as a motivational speaker and became a renowned name in every Israeli household.

There’s another aspect of his career that came into limelight later in his life for being too controversial and confidential. Leading investigation organizations like FBI and CIA have also sought Uri’s partnership in solving several cases. He has performed a number of awe-inspiring tasks for them, ranging from employing his mind power to track serial killers and discard KGB files from computers. In his own way, Uri Geller has contributed to influence the Russian chief negotiator to sign the Nuclear Arms Reduction Treaty on behalf of the Soviet Delegation. He has also been a proactive part in the nuclear disarmament negotiations to bombard. He also got the opportunity to address a group of US senators and other national security executives at Capitol Building’s high-security room in Washington.

Large multinational companies look up to Uri Geller when they need to book a motivational speaker for events. He has lectured the distinguished CEOs and Directors of industry giants and political associations such as the Prime Minister’s Conference, Rolls Royce, Henkel, Sony, Novartis, Mizuno, and Hallmark.

In 2006, Uri got the opportunity to mentor the heads of Google Europe, and Reuters in Jerusalem. In 2007 and 2008, he motivated Turkey’s chemical giant German in Istanbul, and Balderton Capital at their Annual CEO Summit in London, as a Guest Speaker.