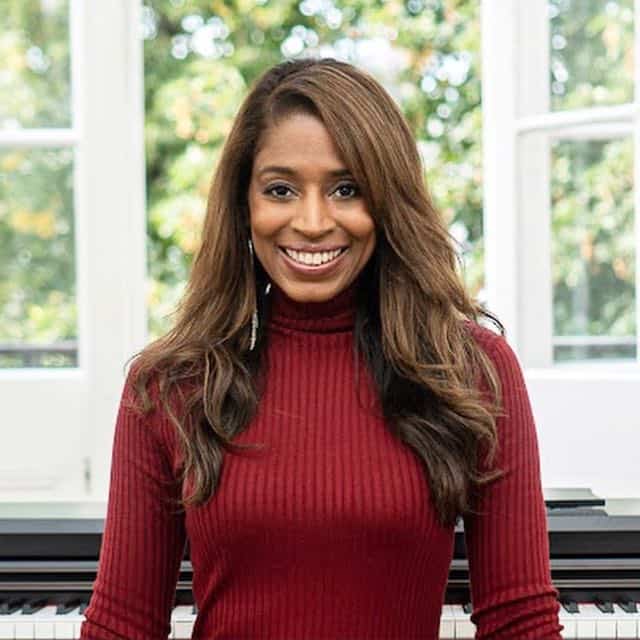 CeCe Sammy is a classically trained musician and one of the world’s leading vocal and performance coaches who has worked with artists and actors from the BBC, Paramount, Warner Bros and Universal.

A classically trained musician and one of the world’s leading vocal and performance coaches who has worked with artists and actors from the BBC, Paramount, Warner Bros and Universal.

Starting her career as a backing singer for Diana Ross, she is passionate about the power of creativity to change all our lives for the better, a patron of The Arts and a champion of young people.

Most of all, CeCe wants every person to know that knowledge is power, no matter what age you are, what background you come from or what obstacles you face.

Born in Trinidad, home of the biggest carnival in the Caribbean, CeCe grew up obsessed with Soca music until, one day, she spotted flamboyant piano impresario Liberace on the TV. “I saw him in these amazing outfits, wearing diamond rings and a huge smile as he played the most beautiful music and thought, that’s what I want to do!” she says, “So I started listening to classical music and learning piano every day while all my friends were outside playing.”

CeCe proved a prodigious talent and, aged 14, moved to London with her mother and sister to pursue her passion at the London College of Music. She still believes very much in her mother’s philosophy of doing things properly and with pride.

Education was paramount in CeCe’s life, and she is constantly aware of how lucky she was to have a parent who believed in her and who pushed her to excellence. But she also believes that everybody has creativity inside them, even if they believe they do not.

“The creative world is something that you own,” she tells everyone who crosses her path.

“It’s heartbreaking that not everybody has the opportunity to flourish and explore what they are capable of. “But even for those on low incomes, I want people to know that education and creativity will help them get to anywhere they want to go in life. If they explore and allow creativity to expand in their hearts and minds, they can achieve wonderful things for themselves and their families.”

“Education can happen via people around you or by travelling, by reading or simply by being curious enough to look something up on Google, “says CeCe. “Learning doesn’t have to be boring or happen only in schools.”

CeCe believes that Creativity, as an umbrella term, can be misunderstood. It does not have to mean that somebody is artistic or naturally gifted in Arts subjects. It can also be about “a shift of energy.”

“Even someone working in finance, retail or manual labour has creativity inside them and, what’s more, I think creativity is essential and should never be ignored,” she explains.

The Coronavirus lockdowns were, she believes, the perfect example of how creativity naturally seeped out of all of us and was essential to our collective recovery.

“It doesn’t matter what kind of family you come from, we all need creativity,” she explains, “Look at what happened in lockdown. Whether you lived in a huge house or a tiny apartment, people were baking, they were dancing, they were gardening, making TikToks, sculpting their bodies at home gyms, drawing and rethinking their life choices. We were locked down and cooped up and it was creativity that saved us. And by that I mean a shift in the usual patterns, a changing around of energy and the ability to embrace that change.”

Few people know better what it is to overcome adversity than CeCe herself.

Nine years ago, not long after giving birth to her baby daughter Isabella, CeCe suffered a massive brain aneurysm, which left her in a coma.

The odds were terrible. Around three in five people who have a subarachnoid haemorrhage die within two weeks, and half of those who do survive come out the other side with severe brain damage and disability.

CeCe had to teach herself how to speak again, how to hold a knife and fork, how to play her beloved piano, then read, then read music again.

“The doctors knew I was starting to recover when they saw I was reacting to music being played to me in hospital. I couldn’t even talk yet, but I was moving my fingers and pretending to play the piano,” CeCe says.

It took her three months to be able to look at an object and give it its correct name. And it was patience and perseverance that got her through. “My approach was learn something, then stop. Then master that. Then learn something else, then stop.”

It is this powerful lesson of grace, patience and revelling in small victories that CeCe now instils in her clients. People still come to her for vocal training, but many also come to find out how they can fulfil their potential or realise the buried creativity within themselves.

Most recently, CeCe is involved in The Arts as a campaigner and advisor.

She has begun working with the V&A and is a patron of Speakers for Schools.

Midway through a Political Sciences Course with Oxford University Further Education, CeCe would love to help shape government policy to make Creativity a superpower for all young people.

Often referred to as “The UK’s Vocal Whizz“, CeCe Sammy is a leading vocal and performance coach who works in London and Los Angeles.

She is known for her TV appearances, on screen and behind the scenes contributions as a vocal coach, TV judge, advisor, talent scout and trouble-shooter on various music and entertainment shows. CeCe’s successful career has led to her becoming the industry’s go-to vocal and performance coach, as well as become a major name in the global music industry.

In 2016, CeCe was chosen to be the Chairperson of the UK Jury of Eurovision, the longest-running annual international TV song competition (and one of the most watched non-sporting events in the world!).

Since 2017, CeCe has worked closely with the BBC, in part as Series Head Vocal Coach for BBC One’s ‘Let’s Sing and Dance for Comic Relief’, and also as a member of the development team creating the show ‘Pitch Battle’.

She has most recently been Head Vocal Coach on the BBC’s new singing show ‘All Together Now’. CeCe has also been a member of the BRIT Awards Voting Academy since 2017. CeCe has featured on BBC’s vocal coach television show ‘This is My Song’. In 2019, she was also an ambassador for BBC Education and Bring The Noise campaign providing free primary school music resources