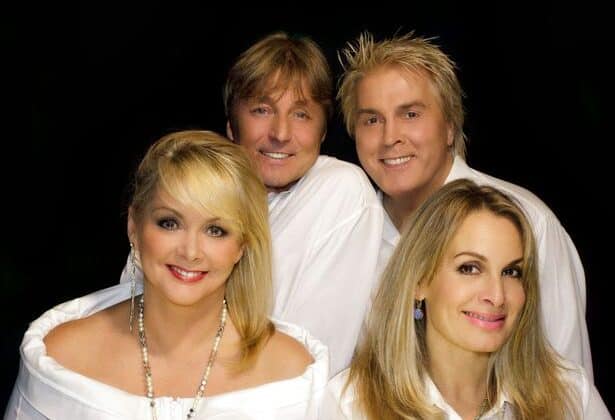 The act formerly known as Bucks Fizz are back with a new name, new member and new single and are embarking on a UK tour

You’ll know them better as Bucks Fizz but the Eurovision winning group are back with a new name, a new member and a new single ahead of their show on Tyneside.

The four piece – now known as The Fizz – will take the stage at Playhouse Whitley Bay on September 29 and have teased what’s to come with the release of their new single Dancing in the Rain, which is produced by legendary mixmaster Mike Stock.

Taking things bax Mike Nolan, Cheryl Baker, Jay Aston and Bobby G were household names thanks to their iconic skirt ripping routine, and the song Making Your Mind Up was an instant hit giving the group their first No. 1.

They secured their niche, re-styling and proving their versatility as performers with each album and single released, earning them sales of more than 50 million records worldwide. They collected countless music industry awards including, in 1982, Best Group at BPI Rock & Pop Awards (now known as the BRIT Awards), and an Ivor Novello Award, cementing their place in 80’s music history and a highly successful recording career.

Thirty-five years later, Cheryl, Mike and Jay, original Bucks Fizz members, joined by Bobby McVay are still touring and showing that The Fizz and their songs are as popular as ever. Audiences old and new love Making Your Mind Up and The Land Of Make Believe.

Bringing together The Fizz and Mike Stock, many would say, should have happened decades ago.

Mike Stock (who came to prominence as part of Stock, Aitken and Waterman) is now acknowledged as one of the most successful producer-songwriters in pop music history. The Fizz have re-recorded three classic Bucks Fizz tracks and a whole host of new songs, including some penned by the band themselves.

Talking about working with the band, Mike said: “The Fizz are part of British pop heritage. They are extraordinary artistes. Still holding the crowd and wowing them!

“This kind of uplifting entertainment never ages. It was so much fun working with them because they are great performers and we all had a great time making the album. Which is why I’m already planning the next.”

On recording their new album The F-Z of Pop, Cheryl said: “I cannot tell you how happy I am to have been back in the studio, my favourite place and with the genius that is Mike Stock. I am so proud of this new album and I know Fizz fans will love it too!”

New member Bobby says of joining the band for the album: “Totally under pressure working with the leg-ends that are Cheryl, Mike and Jay and some little bloke called Mike Stock.

“Recording the new Fizz sound, which sounds absolutely amazing, I can’t believe my wish has come true. Living the dream!”

*Tickets to see The Fizz in Whitley Bay are now on sale from the box office and online from Eventim.