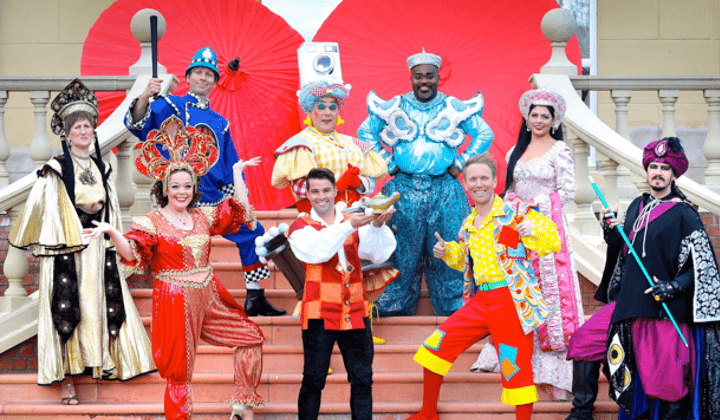 WATCH: Joe McElderry and the cast of Aladdin talk about coming to the Black Country

FAMILIES are in for a whole new world of entertainment when Aladdin comes flying into Wolverhampton’s Grand Theatre.

Joe, who shot to fame on the ITV singing competition seven years ago, plays Aladdin and promised the show would be packed with a lamp-full of laughs.

Although this will be Joe’s fourth pantomime, he said he had never done a show with “such an elite cast” before, adding: “I think it’s going to be great fun. There’s a great energy with pantomime, you just laugh and smile every day. You get the mixture of acting, singing, dancing and there’s a magician this year so there will be some magic thrown in as well.

“The audiences are always amazing with all the kids that come – for some it’s their first time being at the theatre and they get so involved.”

Pantomime veteran, Lisa Riley, who is best known for playing Mandy Dingle in Emmerdale, will take on the role of the Slave of the Ring and revealed she will be wowing audiences with some of the moves she picked up during her time on Strictly Come Dancing.

With the singing and dancing covered, it has been left to Doreen Tipton to add a bit of Black Country humour to proceedings.

But Doreen, who is a self-confessed lazy cow, said she only took the part of the Lazy Empress Of China after being reassured by the job centre that it wouldn’t affect her benefits.

She said: “I was perfect for the part. I don’t see it as being lucky, when you’re working as it’s still work but I’ve made sure they know exactly what’s what.”

Doreen admitted she didn’t know who the majority of her fellow cast mates were before she got the job but said: “They’m lovely, they can’t stop smiling, they’m a right happy bunch.”

There will be more comedy from year’s fabulous pantomime dame, Widow Twankey, who will be portrayed by Ian Adams.

He said: “She’s the mother of Aladdin and Wishee Washee, she’s a mumsy laundress, who is very poor until later on in the show.

“The dame is a great part to play, I can be funny in a frock and get away with things you wouldn’t normally be able to, the jokes for the adults and visuals for the kids. Everybody loves a dame.”

The fun-packed show will run from December 10 to January 22.

There will also be a relaxed performance for those on the autistic spectrum and/or with additional needs at 11am on January 19.

At this performance, sound and lighting levels will be adjusted to make the auditorium environment less stressful, aiming to reduce anxiety.