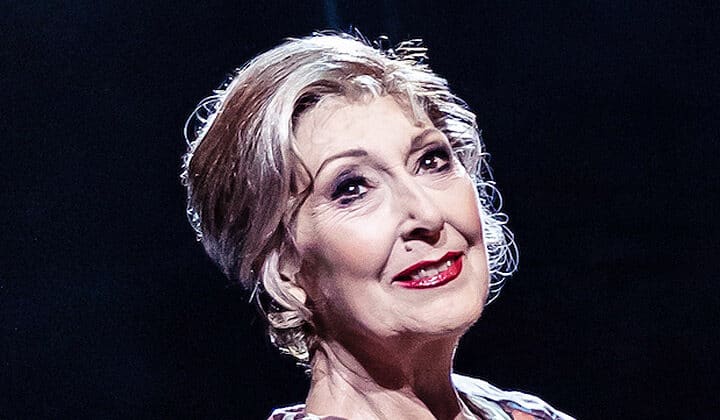 The Theatre website interviews a stage and screen star who tells us about her latest role in Cabaret and looks back at a memorable career.

Hi Anita Harris. You’re starring in the hit production of Cabaret. For anyone who doesn’t know the musical, what’s it about?

It’s a very strong story, set in Germany where an undercurrent of bad feelings is beginning to grow. People are beginning to feel that something is not right. The state of Berlin at this period, between the wars, is pretending that everything is good, but underneath this dark river is flowing that is not at all clean. Sally Bowles comes from England to get any sort of work she can in show business.

She finds it at the Kit Kat Klub, where you’ve got this glorious, vivacious energetic music and dancing, but they’re too is an undercurrent of lasciviousness, of the wrong clientele, of everything becoming a little bit black.

You’re playing Fraulein Schneider, who runs a guesthouse that hosts all manner of characters. What can you tell us about her?

Ah, dear old Fraulein Schneider. She comes from a well-bred family, but her life has changed dramatically. She is a very wise woman but she’s also very blinkered. She doesn’t want to know what is really going on. She sees all and then puts the shutters down when she doesn’t want to show she’s aware of the truth.

One of her paying guests is Herr Schultz, who she falls in love with. But there’s a huge spanner thrown into the works; the fact he’s Jewish and we’re going into Nazi Germany. The important thing is her strength against all odds. She has to be very strong, but her steeliness is a front because she’s an old softy really, especially when it comes to Herr Schultz.

Many people will know Cabaret from the Oscar-winning film starring Liza Minnelli. How is this production different?

Cabaret is so cleverly written. The music and lyrics by Kander and Ebb are delicious in their craftsmanship, their sorrow, and their lightness. The last scene is deeper than anything I’ve ever been involved in. It just says “This is what happened and please let it never happen again.” The trueness of the production is wonderful.

Yes, there is sadness, but there is also huge joy, a lot of laughter, and lots of wonderful lyrics, music, and talent. All of this is brought out by our director, Rufus Norris (director of the National Theatre).

Two of those talented performers are Kara Lily Hayworth, who’s taking on the iconic role of Sally Bowles, and John Partridge who is playing the Emcee. How have you found performing with them?

Kara’s a delight in every way. She plays the role in a very true way. Even though Sally’s working in a really bad nightclub and throwing herself at men, Kara has a lovely balance between innocence and having to do a job. And then this voice comes out! She is a lovely girl and I’m very fond of her, but I also have huge regard for her talent.

John Partridge is just glorious as the Emcee; his interpretation of the role is hugely energetic and mischievous, and he’s great fun to work with. And we also have absolutely outstanding dancers who perform the most amazing acrobatics while singing and acting! Javier de Frutos won the Olivier Award for the extraordinary choreography of this production.

The piece was written more than 50 years ago. Is it still relevant today?

I think it is even more relevant than ever. It touches the audience in a million ways. Our world doesn’t know where it’s going right now. I just pray that it will lighten and come out of this dirge of fear, worry, and aggression. There is so much aggression now; when you see it in theatre production, so strongly portrayed, it can’t get into people’s souls.

You’ve been working in the industry since the 1960s. How do you still find the energy to tour?

Honestly, it’s tough. It’s not just the shows, it’s the travel, arriving, finding hotels, or digs. But something has always been with me – I walk through a stage door and the adrenalin pumps. I am so grateful for that.

The desire to do a good job overrides all of the fatigue. I’m afraid I still love it. When you’ve got a company like this, that is so talented with a warmth of spirit, it’s a delight, it really is.

How important is it to take shows out on tour?

I think it’s more important than ever. To get out to the people is as necessary now as it ever was. People need music in their lives and they need a sense of drama. You walk into the foyer of a theatre and there’s a wonderful buzz.

Then you go into the auditorium, the lights go down and the music starts… It’s just invaluable, it’s so necessary. There’s something tangible about sitting next to a stranger and at the end of the production, that stranger is a friend because you’ve shared something.

When you look back on your career, which ranges from dancing in Las Vegas to a pop career to appearing in the Carry-On films and more, what are the highlights for you?

It’s the people that I have worked with. The first one that comes to mind is Harry Secombe. I did eight months at the London Palladium with him – we did two shows a night, three on a Saturday.

At the end of that, he said, “I’m doing some shows for the Combined Services Entertainments I’d love you to come with me.” So I ended up doing 12 CSC tours with him, going to Cyprus, Germany, Borneo… At one, we arrived and the boys from the army were building a stage for us to perform on that night! These experiences you can’t ever forget.

There was another moment with Harry at a benevolent show for the Royal Family. At the end of it the curtain came down and Her Majesty the Queen Mother came on stage and spoke to everybody. These moments still ring in your ears and live in your heart. And they should do it because they’re precious.

Do you have any advice that has stuck with you throughout your career?

I have the word “Believe”, which I got from a wonderful director who directed me in Peter Pan. Her name was Pauline Grant. She was an iron butterfly of a woman. She said, “Anita, whatever you do in life just remember that if you believe, the audience and your company will believe. Keep that word in your soul.” I’ve carried that with me always.