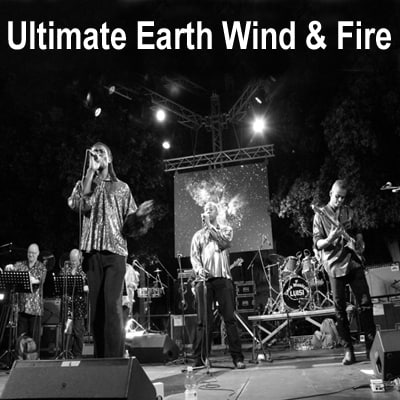 Creating the sound and sensation from the ’70s and 80’s Super Group Earth Wind & Fire.

Creating the sound and sensation from the ’70s and 80’s Super Group Earth Wind & Fire.

Ultimate Earth Wind & Fire have created the ultimate show by bringing you an incredible 12 piece band consisting of musicians who are CV’s include: Queen, Lionel Richie, Robbie Williams, Chaka Khan, Stevie Wonder, and Kylie… to name just a few !!

They perform a breathtaking show laced with all the hits and classic album tracks such as Boogie Wonderland, September, Let’s Groove, and Fantasy. You’ll be captivated by this spectacular production of timeless classics as UEW&F performs hit after hit to perfection.

So please turn your speakers up, sit back and enjoy!!!!

This 12 piece band based in London have collectively recorded or performed with some of the biggest names in the music world. They have created the ultimate tribute to EW&F with a line up of Bass, Drums, Guitar, two Keyboards, Percussion, a four-piece Horn section, and two incredible Singers to recreate the falsetto highs of Philip Bailey and funky lows of Maurice White while being complimented by backing vocals from the band.

Playing all the hits and classic album tracks, from the Funk of “Boogie Wonderland” to the soulful harmony of “After The Love Has Gone”. You’ll be captivated by this spectacular production of timeless classics as Ultimate Earth Wind & Fire perform hit after hit to perfection.

The BBC – “The Tribute Band Night” in Holland, – They have completed a 27 date tour of the United Kingdom, and regularly perform Summer Festivals with acts such as Rose Royce, Alexander O’neal, Nick Kershaw, Shakatak, Boney M, Hot Chocolate, Heatwave, and The Real Thing…