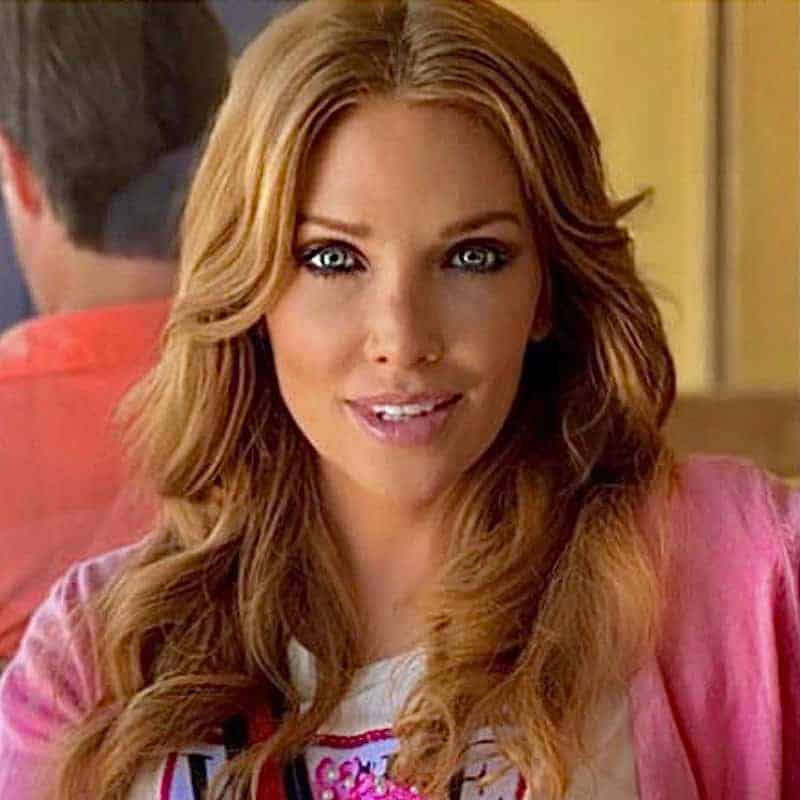 Angelica is in and out of the UK regularly, so please call or email for availability.

The expression “multifaceted” is just one of the many ways to describe Angelica Bridges. Angelica, who hails from a small town in the USA (East Lynn, Missouri, pop. 150 people); credits her notably down-to-earth personality from being raised on a farm in the countryside. Bridges began her leadership and philanthropic aspirations at the age of 16, when she was crowned, “Miss Missouri Teen”.

She made a bold move to Hollywood right after high school and is perhaps best known for her role as “Lt. Taylor Walsh”, on the international television series, “BAYWATCH”. The show would go on to become, “The Most Watched Television Show in the World” and aired in 142 countries.

Angelica ﬁnds great pleasure in wearing many hats eﬀortlessly as a successful actress, television host, pastry chef, producer and philanthropist. An avid baker since the age of 7 and also a pastry chef, Angelica has launched her very own signature gourmet dessert line called, “LIKE, YUM.” The new line is described as, “soulful down-home Southern style desserts fused with elegant European overtures.”

Bridges continues to be a part of innovative and humanitarian driven projects and recently made a life changing trip to the kingdom of Eswatini, Africa. Angelica visited local schools and met with the royal family (one of the last monarchies still in place in Africa), where she was invited to the royal palace to have lunch with the Crown Princess Sikhanyiso. This collaboration will hopefully bring an array of humanitarian eﬀorts as well as commendable business opportunities into the country. In 2019, Angelica was a contributor and wrote her personal take on achieving success for the inspirational book, “100 Habits From the Happiest Achievers on the Planet” which is currently available on Amazon.

Bridge’s humour and quick wit, and genuine interest in multiple causes, continues to keep her immersed in television, entertainment and public speaking and presentation. In 2016 she was on the cast of the primetime Survivor-inspired reality series, “Kicking and Screaming” on FOX. Her true survival skills were put to the test while living in a jungle in Fiji with no food or shelter. This became a truly life changing adventure. Aside from being a regular on the television series Baywatch; she reignited her character, “Lt. Taylor Walsh” after starring on the tv series for the “made for tv’ movie. The Baywatch reunion movie, “Baywatch Hawaiian Wedding”, was ﬁlmed in Hawaii and it also aired on Fox. Besides Brigitte Neilson, Bridges has been the only other actress to play “Red Sonja” on screen, which was on the syndicated television series, “Conan the Barbarian.” Bridges has had RECURRING roles on “The Days of our Lives,” “The Bold and The Beautiful”, “Mortal Kombat” and “Son of the Beach”. She has also guest-starred on over 20+ television series; including, “N.Y.P.D Blue”, “That 70‟s Show”, “Veronica Mars”, “Kitchen Conﬁdential”, “Quintuplets”, “VIP”, “Suddenly Susan”, “Paciﬁc Blue”, “Cybill”, “Metropolitan Hospital“, “The New Mike Hammer” & “Ask Harriet.

Hostess with the moistest

Top notch hosting gigs; as well as being a television news anchor and being a special guest on many diﬀerent news panels have also played a signiﬁcant role in her television appearances. Angelica was previously a host for VH-1 UK and hosted the weekly series “Spice.” She was the series regular host for TBS’s “Big PlayStation Saturday” and ﬁlled in on her dream job as the regular host for E’s “Talk Soup”. She has been part of expert panels for, ” Fox News Channel’s “The Sean Hannity Show”, “Issues with Jane Velez-Mitchell” & “The Red Eye” on Fox. She enjoys hos0ng “live” ceremonies and has co-hosted “The Diversity Awards,” “Miss Fitness USA” for ESPN, “The World Series of Poker” & “The Elite Model Look of the Year” for E! Television. She has been a correspondent and a red-carpet interviewer for “The Young Hollywood Awards,” “The Breakthrough of the Year Awards” and “The Red Carpet” for “Showtime.” She has hosted her own segments, “Top Secret Beaches” and “Beach Week” for The Travel Channel, & specials for CMT, MTV and American VH1. She has also been featured on Entertainment Tonight, Inside Edition, Good Day LA, KTLA, Extra and The Big Breakfast in the UK.

Music has inspired her for most of her life and after arriving to Hollywood, she landed a contract to tour Asia, singing & performing for 20,000 + fans a night. She also was the headlining singer for the “Luxor Hotel” in Las Vegas which featured her image on a 50-foot billboard on the side of the Luxor Hotel. Soon after her Asia tour, she signed with one of the top international modelling agencies in the world, “Elite”. Some of her national and international campaigns include Maybelline, Diet Coke, BMW, Geico, Hanes, Doritos, Nivea, Bally‘s Total Fitness, Lexus, Fruit of the Loom, Pontiac, Tab Energy Drink, Pepsi, Toyota, Miller Lite, Whiskas cat food and Mitsubishi.

She has also graced the covers and pages of many magazines around the world, and she can easily be remembered in the “Brut Cologne” campaign alongside NFL hero, “Troy Aikman”. She was a ballroom dancing ingénue in an Emmy nominated (Super bowl ad) for “American Express”. She was one of the ﬁrst few females to ever represent the “UFC “in an ad campaign titled, “Beauty and The Beast”. She was also the face and hair of “Clairol” after landing a 3-year contract with the household brand. She had the pleasure of co-starring with Kevin Costner in a print and television ad campaign

for “Valverde” a shoe company in Europe. Another ironic and a totally memorable job was being cast opposite of singing sensation, “Pharrell” for one of his spec music videos. Bridges was cast opposite of Pharrell while he sang the lyrics to his hit song, “Come get it Babe.”

Bridges lives for philanthropy and has been dedicated her life to animals and to animal rescue as well as humanitarian causes. She enjoys dona0ng her 0me to many other charitable & non-proﬁt organisations besides her own foundation including, The Midnight Mission, Children’s Miracle Network Hospitals, Habitat for Humanity, Save the Children, A Couple Guys and Gals Give Back, Susan G. Komen Foundation, The Humane Society, ASPCA, The Brent Shapiro Foundation, St. Jude’s and Locks for Love are just a few of the causes she has been honoured to support, volunteer and be a part of.