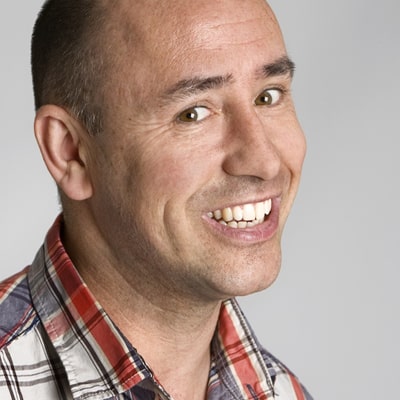 Mike has hosted numerous television shows for the BBC, ITV, C4, C5 Sky1 and Nickelodean and excels at live TV.

He originally trained as an actor at the Arden School of Theatre in Manchester. However, after leaving college Mike gravitated towards stand-up comedy and quickly broke onto the circuit with a comedy magic act. He was soon spotted by a TV producer from Nickelodeon and went on to front several shows for the channel, including ‘Nick AM’, a live daily breakfast show. He later joined ITV to present the kids game show ‘It’s Not Fair’ followed by 2 series of ‘Mad for It’, a live children’s show he devised for ITV.

In 2001 Mike moved to Channel 4 and joined ‘The Big Breakfast’. He was soon waking up the nation, knocking on punters’ doors and interviewing some of the biggest stars including Julia Roberts, Brad Pitt, Britney Spears, and many bands of the day.

After ‘The Big Breakfast’, Mike continued to work for Channel 4 as the roving reporter on ‘Richard & Judy’, a job he loved and excelled at for six years. During this time he also presented ‘House of Games’, a family entertainment show for Challenge TV. Following this, he presented the XFM Manchester Breakfast show from 2008 – 2009.

In 2010 Mike returned to his acting routes playing ‘Father Tony’ in ”Shameless”. Previous cameos have included ‘Club Host’ in ‘The Office Christmas Special’. 2010 also saw Mike return to the comedy circuit and he’s currently developing a new comedy mind reading show, which he plans to take to the Edinburgh Fringe in 2012.

Mike continues to be in demand as a voice-over artist. He’s also a firm family favorite for Christmas pantomimes with one of the best song sheets in the business. Christmas 2011 saw him play ‘Idle Jack’ in Dick Whittington at the Derby Assembly Rooms.

Mike is a huge football fan (Manchester City) and remains a pretty good player. His dreams came true when he took part in Sky 1’s ‘The Match’. Mike and a team of celebrities (managed by Graham Taylor) played a team of former football professionals, at St. James Park to a crowd of 55,000.

Mike is also fluent in Spanish, a very good cook (particularly paella), and one of those rare breeds who enjoy DIY.