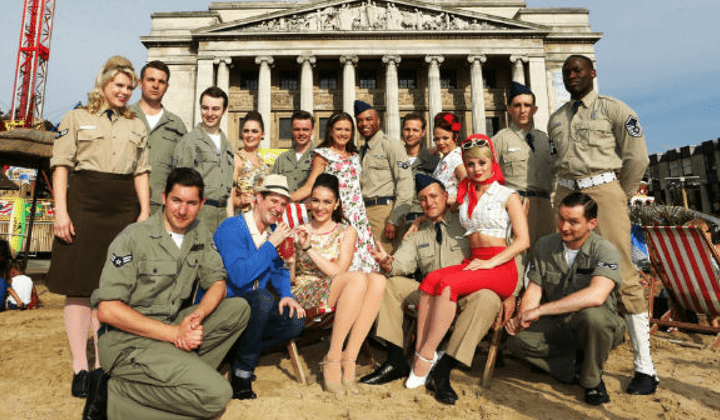 After hours of singing and dancing in two shows a day, where better for Antony Costa AND LOLA SAUNDERS  to relax than with a spot of Hook-A-Duck at Nottingham’s Deliveroo beach.

Best known for being in Blue, the pop singer is now appearing in Save The Last DanceFor Me at The Theatre Royal until Saturday, alongside Lola Saunders of X-Factor fame.

The show is a spin-off of Dreamboats and Petticoats, and follows the story of two sisters who head to the beach in search of adventure and find love along the way, set to a sixties soundtrack.

Antony, Lola and the rest of the cast took a stroll to the beach, found a few deckchairs and enjoyed a frozen cocktail or two between the matinee and this evening’s show.

Antony took some time out to answer a few questions about the show and life on the road.

You play an American airman, Milton. Tell us a little about him and what people can expect?

“The role that I play is sort of a ladies man, a bit of a cheeky chappy. He’s the sort of bloke that wherever he lays his hat that’s his home.He had a different girl in every port that he went to. He meets two sisters called Marie and Jennifer. He invites them along to a party at the base, they come along and Marie the younger sister falls in love with my best mate Curtis. It’s about their love story, their journey. It’s in and amongst some fantastic songs and music by Doc Pomus and Mort Shuman that were very big in the sixties.”

Why do you think those songs are still so popular after all this time?

“I think they’ve got the longevity because they’re fantastic pop songs. You always know a good pop song when the minute you hear it you know all the words and the chorus. When we sing ‘Save The Last Dance For Me’ at the end of the show everyone starts singing it and it’s like a massive concert. I love singing Viva Las Vegas and One, Two, Three so they’re my personal favourites.”

“It’s quite warm today and it’s especially warm onstage. I’m hoping the weather will chill out a little bit, I’ve got a bit of weather envy as everyone else is out here in the sun and we’re indoors, but we’re getting to do what we love which is performing!”

You’re no stranger to musicals, you also appeared in Blood Brothers and Popstars: The Musical, what is it that you love about musical theatre?

You’re taking time out to relax at the beach between the matinee and the evening show, what else do you all get up to in your down time?

“We’ve got some stuff going on tonight, it’s our company manager Helen’s leaving do and we’re doing a massive quiz as she likes quizzes. I dunno why, but I call her Egghead! It’s great because it really brings the company together. When you’re doing this it really is like a Big Brother scenario where you’re living in each other’s pockets and it’s just nice to chill out, you don’t really talk about work and have a nice time!”

How does touring with the show compare to life on the road with Blue?

“Life on the road with Blue I was just with three lads and a manager and tour manager, whereas this you’re in a massive company and everyone is booking hotels. With Blue I hate to say it but you had everything done for you which was a shame, obviously I was thrust into the limelight, I didn’t have a clue! I couldn’t pay a mobile phone bill until I was 22! I loved touring, I loved touring with the boys but this is just really cool as you dig in and get in amongst it.”

What’s next for you after this?

“I’m having a couple of weeks off then hopefully going on holiday with my family, then I’m going straight into panto, I get to play a baddie! It’s all versatile.”

After this he treated himself to a few games of Hook-A-Duck but sadly didn’t win, but said he’ll come and try again between shows on Saturday. You can catch Save The Last Dance For Me at the Theatre Royal until Saturday.

See the interview with Antony and his Hook-A-Duck antics below: