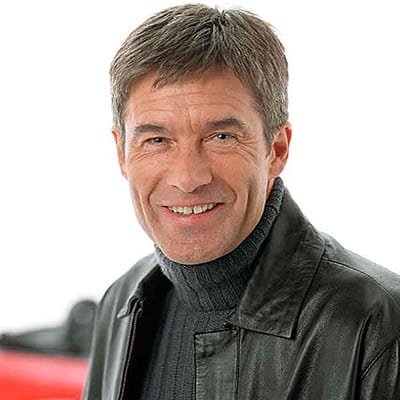 Tiff’s media career began in 1982 as a track tester for ‘Autosport’ magazine and he has always written all his material himself.

Tiff’s switch to the other side of the camera came in the early ‘80s when he was attending race meetings in the hope of picking up drives and instead got ‘picked up’ by the BBC to be the expert analyst alongside Murray Walker at the many live motorsport events featured on ‘Grandstand’ at that time.

Tiff commentated on Formula 3000, Formula Two, Touring Cars, Rallycross, and the Formula Ford Festival – which Tiff went on to cover on his own due to date clashing with Murray’s commitments at the Australian Grand Prix. By the late eighties when such events went ‘post-production’ Tiff would often stand-in for Murray when he was unable to attend the ‘as live’ commentary sessions at the BHP Studios and became the number two commentator for all motorsport on ‘Grandstand’.

In 1991 he was engaged as the ‘Grand Prix’ commentator for BSkyB but, after the first three races of the year, the company lost its rights so the transmissions ended. However, come 1992 and ‘93 Tiff was back in the Sky studios hosting live transmissions of both ‘NASCAR’ and ‘Indycar’.

By now ‘Top Gear’ was taking up more and more of Tiff’s time. Having started back in 1987 by just doing occasional motorsport items, he was now lining-up every week alongside Jeremy Clarkson and Quentin Willson on a show that was beginning to attract audiences of six million and more.

From 1995 to ’98 Tiff headed the ‘Top Gear Motorsport’ spin-off program, presenting and competing in a wide variety of events, and also appeared in ‘Top Gear Waterworld’ while, from 1997 to 2001, he co-presented BBC’s coverage of ‘The World Rally Championship’.

Sadly all good things have to come to an end and, with ‘Top Gear’ heading for a major BBC overhaul, 2002 saw Tiff switching over to Channel 5 and their brand new motoring program ‘5th Gear’. Since this successful switch, Tiff has gone on to present the much acclaimed ‘James Bond Special’ as well as a five program series on ‘The World’s Greatest’ engineering feats.

Tiff’s media career began in 1982 as a track tester for ‘Autosport’ magazine and he has always written all his material himself. When ‘Top Gear’ launched their own magazine in 1993 he went with it and has now been signed up to switch to the motoring weekly ‘Autocar’.