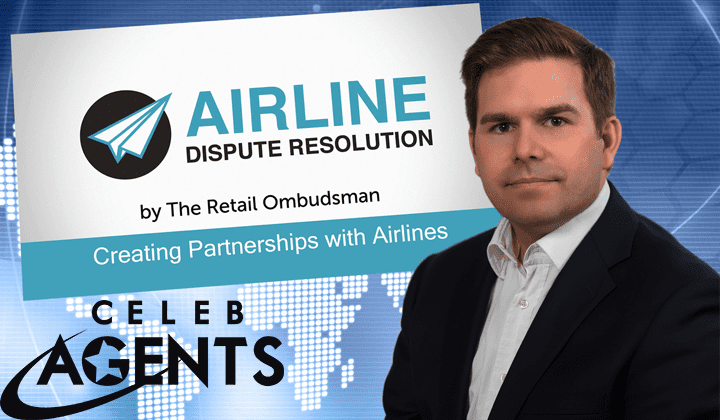 Airline Dispute Resolution by the Retail Ombudsman has been approved by the Civil Aviation Authority (CAA) to make free and impartial decisions which will be binding on all member airlines, providing flight passengers with a brand new free service to handle their complaints if they fail to resolve them with an airline.

It has been set up by the Retail Ombudsman, which is the largest, government approved ombudsman scheme in the retail sector. The scheme will handle all complaints, ranging from late flights to lost luggage.

It is headed by Dean Dunham (above), a barrister with more than 17 years experience in consumer law.

Based at offices in London and Milton Keynes, Bucks, the scheme is staffed by professionals experienced in alternative dispute resolution (ADR), including complaint handlers, solicitors and barristers.

Chief Ombudsman Dean Dunham said: “We have thousands of very happy retail members, largely because they trust us to get it right first time and it puts them at arms-length from the dispute, ensuring the customer is more likely to return to them again.

“Consumers also demand ADR services are free. They are very unhappy to be directed to schemes which make them pay for ADR, especially as the dominant scheme is free.

For this reason, retailers have opted to join us as they recognise recommending a scheme which charges the consumer has very negative PR fallout.

“We expect this to be exactly the same in the airline sector and we look forward to welcoming airlines as members with the same enthusiasm as retailers.”

The Retail Ombudsman is the largest and most experienced provider of ADR in the retail sector. It processed more than 10,000 complaints  in the first half of 2015, 92% of which were successfully resolved at the complaint handler level, without the need for ombudsman intervention.

Mr Dunham added: “Our approach is fresh, innovative and responsive, delivering the results that our members seek – to diffuse situations, achieve resolution and ensure better customer relationships. In this regard, we work in partnership with our members, not against them.”

The scheme has the power to award refunds and compensation and refuse spurious or vexatious claims or reject overinflated customer claims.

It will handle claims from all passenger airlines in the world which land or take off from UK soil and are members of the scheme.

The scheme has been beefed up by the appointment of Gregory Hunt, previously with Ombudsman Services, who have decided to withdraw from the aviation sector.

Greg will be working closely with the Airline Dispute Resolution team to help develop the offering and to on board airlines.

He said: “I am pleased to be working with Airline Dispute Resolution and the Retail Ombudsman.  I have watched its development closely over the last 18 months and been impressed by the speed in which it has established itself as the dominant ADR provider in the retail market.

“I am sure that position will gather strength over the next few years as airlines, retailers and consumers grow to trust that it will be able to provide the most cost-effective, speedy and fair resolution of consumer disputes.  It is an exciting time to join.”