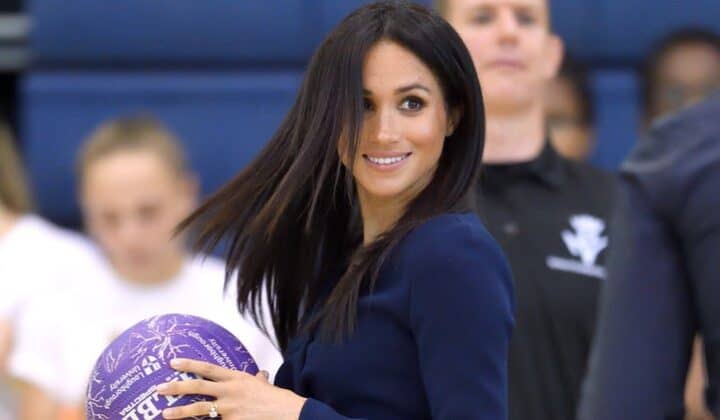 Royals: they’re just like us! Meghan Markle visited Loughborough University on Monday, Sept. 24 with her husband, Prince Harry, and sported a look we’re not used to seeing on her — straight hair!

The Duchess of Sussex wore the sleek hairstyle to the event with Coach Core, an organization designed to encourage people to become coaches and athletes. That said, Meg sported the chic look while taking part in a passing drill!

But as it turns out, Meghan gets treatments to make her strands look as perfect as they are. “Meghan came to see me at least twice for keratin treatments,” Theonie Kakoulli at Nicky Clarke told People in a recent interview. “It’s great for people with naturally curly hair like Meghan, it takes the frizz out and makes it more manageable — she said it made a real difference.” The fancy treatment — coming in at a whopping $300 — takes a few hours to complete, and leaves you with shiny, straight locks.

As we all know, Meghan often wears her hair curly (her most natural look!) or even in a messy bun. However, royal fans can’t help but wonder if the “casual” styles she often goes with breaks royal protocol — especially because Kate Middleton has such strict rules. But Queen Elizabeth is allegedly ok with Meg’s changing ‘dos. “It’s her age,” Ingrid Seward, author of My Husband & I, once stated. “She is easier-going. It’s refreshing that [the royal family] is prepared to bend a bit.”

But for the most part, Meg often looks like her simple self. “Even now, her look has stayed the same. She’ll throw her hair back in a low bun and it actually looks like she’s done it herself, and it’s beautiful and chic because she’s so confident,” her former hairstylist Lydia F. Sellers shared during a recent interview withRefinery 29. “That’s the great thing about Meghan — she’s so confident with herself and her look, and she sticks with that.” Who knows, maybe we’ll see her with blonde hair next!