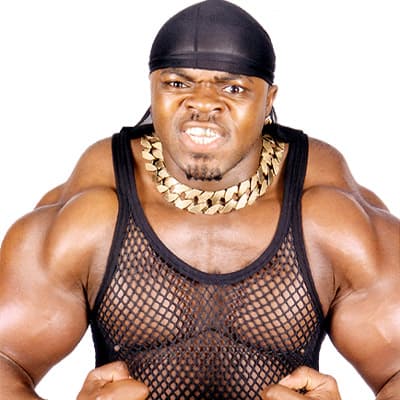 Tiny Iron the UK’s first action hero has arrived! A towering 6′ 3″ tall and weighing 20 Stone of solid muscle, Tiny boasts of having the biggest biceps in Britain measuring a whopping 24 inches!

Tiny Iron the UK’s first action hero has arrived! A towering 6′ 3″ tall and weighing 20 Stone of solid muscle, Tiny Iron, the Wrestler boasts of having the biggest biceps in Britain measuring a whopping 24 inches!

It is definitely a sight to see if you are not blinded by the huge gold chain strapped around his abnormal-sized neck, not to mention the gigantic soft rings on his fingers. You would just hate to be on the receiving end. Take our word for it!

Tiny Iron started out as a bodyguard and has come from the streets of London to the beaches of St. Tropez and on to the glitz and glamour of Las Vegas. Tiny’s clientele includes 50 Cent, Joe, Timberland, Akon, and Pink to name just a few.

Tiny Iron Wrestler capitalized on his status by quickly moving from behind the camera to in front of it by appearing on the BIG SCREEN and starred in the film “The Number One Girl” featuring Vinnie Jones and Pat Morita. Tiny Iron was cast in the film after being asked by Vinnie Jones when he met him in a top nightclub.

He has also completed his second major feature film “Cash & Curry” which has had him getting excellent reviews in the press. The movie stars Ameet Chana. Tiny Iron has also impressed BBC casting directors having landed a role in the comedy TV series featuring UK R’n’B Diva Jamelia.