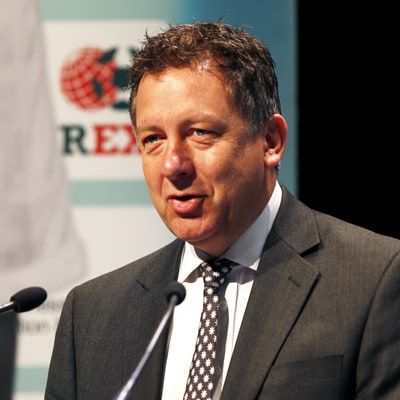 It is now a distinct possibility that Matthew Lorenzo will never play football for England.

It is now a distinct possibility that Matthew Lorenzo will never play football for England. Armed only with two left legs he has battled to win the gaffer’s eye for more than two decades now. In the meantime, he has amused himself by setting records for achieving things early. In 1978 he became the youngest Sports Editor in the country – at the Waltham Forest Guardian – before joining the BBC, first in local radio and then as part of the Grandstand, Sportsnight, and Breakfast Time teams. Matt has hosted a World Cup, launched ITV’s Champions League coverage, covered three Olympics, anchored Formula One for Sky, and interviewed Tony Blair and a cat that played the piano on GMTV.

In 1989 he became the youngest and first sports presenter in space as Sky launched their satellite adventure. He joined ITV Sport in 1993, launching the station’s Champions League coverage and ending up, at 34, as the youngest ever host of a networked World Cup. England’s failure to qualify for said competition gave him brief hopes of the long-awaited call-up. It never came.

Instead, the sofa at GMTV beckoned where Matthew formed a partnership with Penny Smith which led to a long affair and marriage (Penny introduced him to his future wife).

He rejoined Sky in 1998, the only presenter to have been asked back to Sky (twice in fact) he returned to launch their Formula One coverage, host Goals on Sunday and the Sky Sports News breakfast show.and last year hosted the station’s interactive Formula One service. Having almost given up on his footballing ambition he remains ardently neutral about West Ham United.

He went on to create Off The Bar, the first ad-funded show on Sky Sports, host the Olympics for LOCOG, and is now the face of  The Times and Sunday Times online Premier League service.

Matt hosts events for UEFA, Soccerex, the LMA, PFA, and the Economist and spends his spare time waiting for West Ham to win the Premier League.