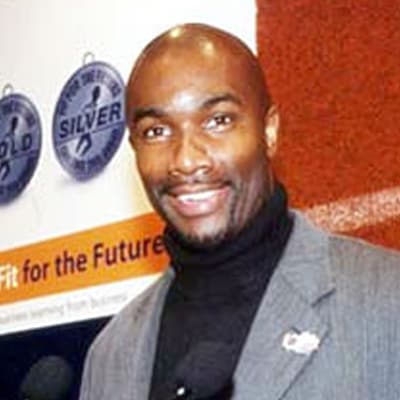 Derek Redmond rose to fame as one of Britain’s leading athletic stars of the late 1980s and early 1990s winning a host of 400m individual and relay gold medals for Great Britain at World, Commonwealth, European and British levels.

Yet it was his now-iconic moment at the 1992 Olympic Games in Barcelona which sealed his place in the history books forever, favourite for the gold, Redmond was just 150 meters into the 400m Semi-final when his hamstring snapped and he fell to the ground. Despite the agonizing pain he staggered to his feet and hobbled the lst 250 meters, joined by his father Jim who helped him over the line.

This inspirational story provides a fascinating backdrop for Derek Redmond’s motivational speaking as he takes his audiences through a gripping rollercoaster ride of emotion,s cataloging the highs and lows of his career and providing a unique inside into the mind of a world-class athlete who defied the odds to once again represent England a number of years later, only this time as basketball star!

In his motivational speeches, he explains the secret behind his success, pinpointing the five Derek Redmond Principles: Team Building, Goal Setting, Application, Overcoming Obstacles, and Performance. A respected TV personality, Derek’s speeches are entertaining and lively and also include video, an engaging presentation, tape measure, and a Rubik’s Cube.