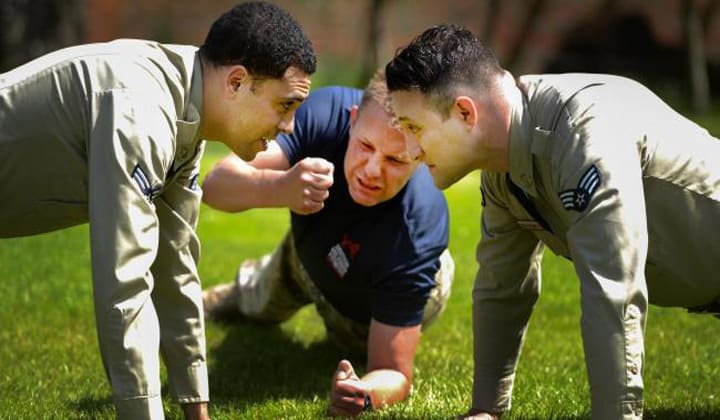 FROM commanding attention on stage to standing to attention for parade, two stars from the world of musical theatre were put through their paces by a military fitness instructor ahead of this year’s Armed Forces Day.

Antony Costa,  of boy band Blue, and Jason Denton both star in the musical Save the Last Dance for Me which is on at the New Theatre, Oxford, in July.

But they swapped curtain calls for tricep curls when they visited the Soldiers OfOxfordshire Museum, in Woodstock, to advertise Armed Forces Day on June 25, which the theatre is supporting.

On hand to put them through their paces was British Military Fitness instructor Jason Field who gave them a taste of what life is really like in the army.

He said: “They did really well, definitely a couple of potential new recruits. Both of them were really good sports and gave it all a good go.

“I think it is great how this country celebrates Armed Forces Day and show support to not just our forces, but also to their families and recognises the sacrifices they also make watching their loved ones going to serve.

“It is the best of British.”

Mr Costa said the gruelling regime has not put him off visiting the city.

He said: “I think it’s a lovely place and I’m looking forward to getting to spend some time exploring.”

Save the Last Dance for Me, which follows two teenage sisters through the summer of ’63 and their first holiday without their parents.